The disease COVID-19, which originated in Wuhan last December, has become a global pandemic since March, which has shut down the whole world. Millions of people have been infected and thousands are killed. Borders are closed, mass gatherings are prohibited, and in some regions, the whole society is under lock down which forces everyone to stay home and stops everything.

As a result, no orienteering races can take place now. On IOF Eventor, the final world ranking race before the world shut was held on 14th March in Brazil, with the last TrailO race held on 8th March in Japan. Races up till the end of July have been cancelled.

Starting from April, orienteering clubs around the world have started organising online photo-Os, most are done using Google Forms. Some are held in a format resembling real-world races, i.e. PreO and TempO with start list, mass-start and ranking list. For PreO, the ranking is determined by the number of correct controls (as in real world), then by the form submission time. For TempO, the ranking is determined by the form submission time plus penalty for each control.

HKOC has organised a photo PreO game every year for a few years already to support the World Orienteering Day. Due to the pandemic the World Orienteering Day this year was officially cancelled, but this didn’t affect HKOC to continue making the photo PreO game which was available on the original scheduled week, 13th May to 19th May. It became one of the online TrailO events available around the world under the global pandemic. It has 25 questions and attracted 369 participants around the world, with 1 from Poland getting full score. It is now holding another online PreO which is done using Google Street View so you can actually “walk” along the trails to observe, like a real-world PreO.

Let’s pray for the world and hope that the pandemic can be over soon such that we can travel and do orienteering around the world again.

HKOC continued to support World Orienteering Day this year, produced an online photo PreO game, which took place on 15th May to 21st May.

The organiser has announced the answers and full results. The activity was popular this year, 344 participants completed 25 questions, among them 10 got full marks, but regrettably there were no Hong Kong participants among them.

Although the activity has ended, the training questions are still open, interested participants can go for practice.

Rules of “Photo PreO”: Participants see a photo, with multiple flags (the leftmost is A, next is B, etc.), and need to answer which flag is the control on the map. There is no Z answer in the game, the control must be placed at a flag.

The following is an explanation: 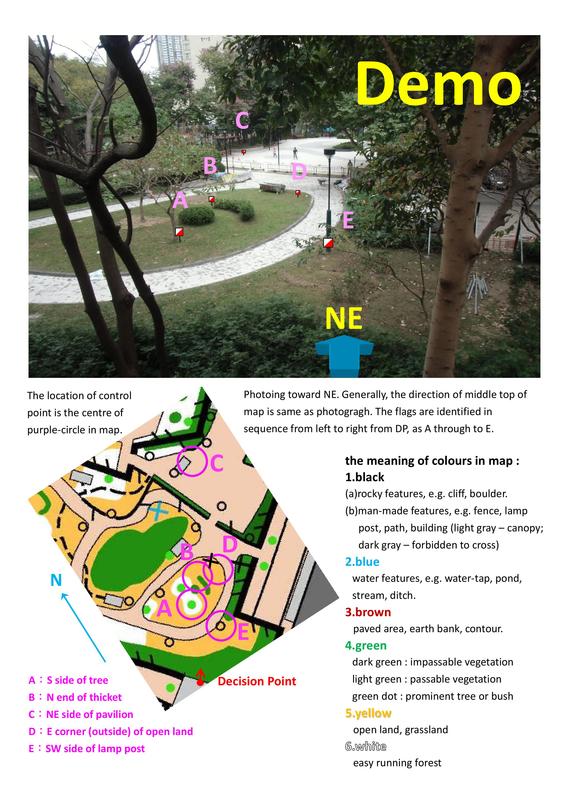 This year’s activity has 25 question, ended at 29th May 2018, 23:59 Hong Kong Time. The organiser has already published the answers and result. 187 people participated this year, decreased by 14% compared to last year. 12 participants got all 25 questions correct, including 1 from Hong Kong.

Although the activity has ended, the training questions are still open, interested participants can go for practice.

This site will contain a few pages, including medallists list, Hong Kong Team member list, introduction to trail orienteering, etc. In the long term, event calendar and photo-O game may be added.

From 2018 there will be world ranking events in TrailO like the other three disciplines, but with different scoring scheme. Also, Hong Kong will hold the 1st Asian Trail Orienteering Championships (AsTOC) in 2019, and hold the World Trail Orienteering Championships (WTOC) in 2020, which will be a WTOC held outside Europe again after it was held in 2005 in Japan. This site will update with relevant information then.

There are no upcoming events at this time.

Scroll back to top